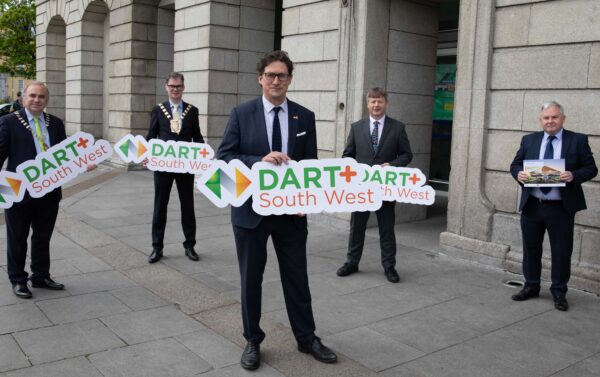 Atkins – a member of the SNC-Lavalin Group – with joint venture (JV) partners TYPSA and TUC RAIL, and supported by RPS, is providing multi-disciplinary services to Iarnród Éireann Irish Rail for the 20km expansion of the DART networks.

The project has been funded by the National Transport Authority, under Project Ireland 2040 and the Innovation and Networks Executive Agency (INEA), with powers delegated by the European Union TEN-T core network, the DART+ South West project, as part of the DART+ Programme. It will deliver an improved electrified network, with increased passenger capacity and enhanced train performance between Hazelhatch & Celbridge and Heuston, and the Glasnevin/Docklands area via the Phoenix Park Tunnel.

The Emerging Preferred Option is also compatible with future stations at Kylemore and Cabra, although the construction of these stations is not part of this project.

The first phase of public consultation on this project is now live. It is designed to present the Emerging Preferred option for provision of DART+ South West to communities and stakeholders along the route.

All are encouraged to review the full details at www.dartplus.ie, which also features an interactive virtual room. A dedicated phone line, email address and online feedback form are all available at dartplus.ie. Due to the current public health restrictions, in-person consultation is currently not permitted. A series of webinars for communities along the route will commence next week.

Speaking at today’s launch, the Minister for Transport, Eamon Ryan T.D, said: We want to encourage more people to make the switch to public transport by making it faster, more frequent and more accessible. The Dart+ South West project is critical to our overall plans for Dublin and the surrounding counties. I encourage everyone to take the time to engage in this consultation process and feedback your views on how we can create a rail service that serves the needs of all its users.”

Tony Mortimer, Director at Atkins, said: “The Dart+ SW project will be a great asset for commuters from the west of the city of Dublin and out to Kildare, improving journey times and reliability.

The public consultation is a critical stage of the project and we hope that many people and bodies will contribute their thoughts on the scheme.  The Atkins Typsa TUC Rail JV, supported by RPS will then develop the project with this feedback to ensure the best possible scheme is brought forward to Railway Order.”

Chief Executive of Iarnród Éireann, Jim Meade, said: “DART has been one of the nation’s major public transport success stories and DART+, with DART+ South West will bring sustainable, fast and frequent train services to tens of thousands of new and existing customers. We encourage commuters, residents, communities and all stakeholders to participate in the public consultation to ensure we understand and incorporate their views in the ongoing design process.”

Anne Graham, Chief Executive of the National Transport Authority, said: “I very much welcome the fact that the first round of public consultation on DART+ South West is now open. This development is a clear indication that real progress is being made across all elements of the DART+ Programme. Thanks to DART+, passenger capacity and service frequency, travel options will be vastly improved for people across the rail network in the Greater Dublin Area in the coming years. DART+ will allow more people to make sustainable travel choices and will contribute to reducing our emissions by providing a reliable alternative to the private car. NTA looks forward to continuing to work with Iarnród Éireann in making DART+ a reality.”