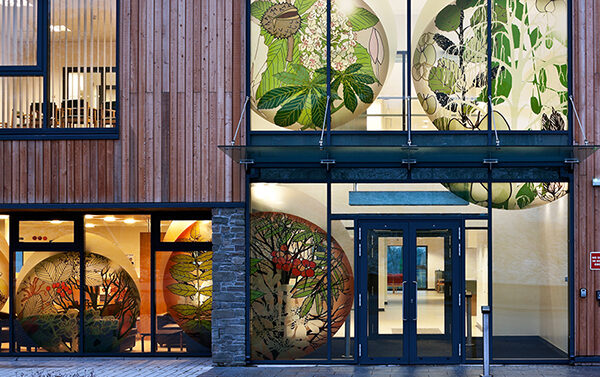 Atkins were the lead designers providing multidisciplinary design services within the Taycare consortium, led by Robertson Capital Projects and Morgan Sindall Investments, with building contractor Morgan Sindall in support. At Murray Royal Hospital, the new facilities replaces existing, out-dated buildings and provides a new expanded mental health service comprising 66 beds in General Adult Psychiatry (GAP), 46 beds in Psychiatry of Old Age (POA) and 67 beds in a Secure Care Centre (SCC) split between Medium and Low Secure wards. The GAP and POA wards are linked through a central Hub containing patient and public support accommodation including ECT/Dental suite, out-patients facilities, Day Hospitals, Therapies Department and social facilities including the café/dining and shop, which provides a fully integrated Campus facility. Due to the security implications, the SCC remains a separate building but connected through a co-ordinated masterplan to provide a cohesive mental health service. At Stracathro Hospital, the project brings a new, co-ordinated mental health service to the hospital in replacement of old, out-dated facilities elsewhere within Angus. A 25-bed General Adult Psychiatry Ward and a 27-bed Psychiatry of Old Age ward are linked in a single building with social and patient support accommodation including Day Hospital, Tribunal services and a Gym.

Atkins developed a fire safety strategy for each site using HTM’s and the Scottish non-domestic technical handbook. Thereafter the strategy was presented to advisers for the end user and the regulatory authorities for agreement via a number of workshops.  The buildings ranged from single to three floors with a gross built up area of circa 29,000sqm.  Each of the subject buildings was divided into a series of fire compartments and sub-compartments to facilitate progressive horizontal evacuation from each ward to an adjoining ward horizontally in the first instance and thereafter to a further horizontal ward or to a floor below. Evacuation to the outside from the occupants was a matter of last resort and only upon agreement between care staff and the fire service in attendance.  Both compartmentation and sub-compartmentation was devised to respect clinical and residential boundaries so as to provide invisible passive protection.

Within NHS Tayside we consulted extensively with clinical staff, estates teams, their in-house fire safety ‘champion’ – we also engaged with the local community council, who were also represented on the design quality engagement group which included artists, Stirling Dementia Centre representatives, Architecture and Design Scotland, Police Scotland amongst others. We also had regular discussion with Perth and Kinross Council Planning, Building Control and Tayside Fire and Rescue. Tayside also had retained architectural technical advisors with whom we had to meet with throughout the bidding and preferred bidder stages to insure that the fire safety strategy did not compromise the architectural and clinical aspirations.