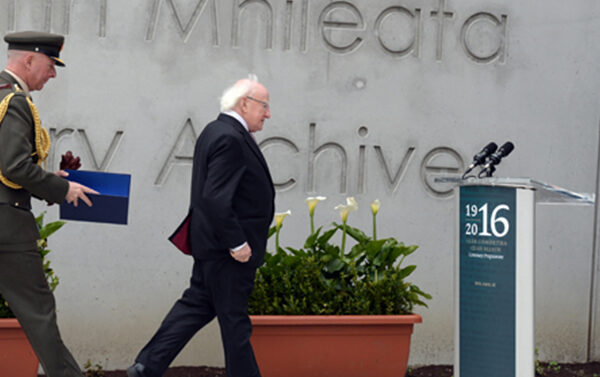 Atkins provided the Civil and Structural Engineering services and associated Ancillary Certifier services as part of an external design team to deliver this project for the Department of Defence.

The Military Archives facility allows for the consolidation of all military archives material that was stored at a number of locations around the country into one new national facility. It provides secure storage of archive material for circa 70,000 archive boxes, plus providing for the storage of ‘special media’ material, such as videos, film reels, photographs, microfilm, etc., which require specific storage conditions.

The new Military Archives is located in Cathal Brugha Barracks in Rathmines Dublin 6. The Irish Army has a fascinating and extensive archive built up over the years since the foundation of the State; it includes Army records, depositions concerning the War of Independence, maps and films.

The new building is located very close to the last house that Michael Collins occupied in Dublin before he went to his death in West Cork. It is made up of two sections- one old and one new- representing at once the tradition and the progressive nature of the Army- and a good example of radical re-use of existing buildings for new uses.

The old section is one half of an old stone and brick hospital block dating from the early years of the barracks; this has been turned on its end and a new entrance opened in the gable leading to a new public library and reading room lined out in timber; the rest is made up of offices and a Conservation laboratory. The new section matches the old in some of its character, extending the architecture of gables, but is made of brick- there is a dramatic folded courtyard between the two.

The storage is provided in a new archive block over two storeys with links at two levels to the existing two storey building of heritage value, originally designed as a Barracks Hospital and constructed circa 1903. This building has been sensitively refurbished to provide a library with reading rooms, administration areas, new feature entrance and ancillary facilities for public access to the facility.

Due to height constraints on the site, the new Archives Block is sunk by ½ storey into the ground, creating a half-basement for the lower storage level. Also due to tight programme to enable the project to be ready for the 2016 commemorations, the main structure consists of a precast concrete frame that has 4hours fire resistance to meet archive facility requirements. The archive storage is an automated mobile cabinet system, which is designed to the best international standards and provides an excellent storage environment.

This new facility has changed a part derelict site and existing unused Barracks Hospital building to an inviting and user friendly building, both for its staff and the visiting public, whilst also enhancing the surrounding community. It is sympathetic to the existing buildings, which are of heritage value, and culturally as one of the flagship projects for the centenary of the 1916 Rising Commemorations, it provides a high class National Military Archive facility for both Department of Defence and Defence Forces’ material. The staff who will occupy this building have been highly complementary of the new facilities and of the benefits that it will bring them in their day-to-day work. It’s reading rooms/library provide a welcoming and excellent environment for the visiting public whilst also providing a valuable resource to those researching the history of the State or family members.

In June 2017, the Military Archives won Best Cultural/Public/Community Building at the RIAI Awards ceremony held in the Mansion House .