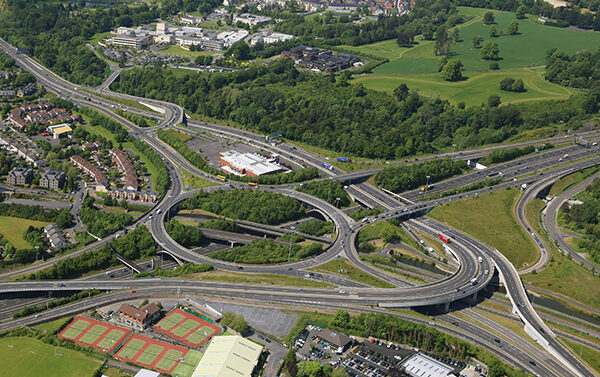 M50 Concession Limited, a consortium comprising Globalvia and Grupo SyV from Spain and PJ Hegarty from Ireland, signed a 35 year PPP concession agreement with the Irish Transport Infrastructure Ireland (TII) in September 2007. Construction works commenced in February 2008 with completion in October 2010. M50 D&C Ltd, a consortium of the same three companies carried out the works with a construction value of approximately Euro 250M.

The project has involved over 150 staff from Atkins and sub-consultants. Works designed by Atkins include two three span steel composite structures at the M1/M50 Interchange. These complex, curved structures are 129m and 97m in length with spans of up to 50m.

At the M50/N3 Interchange, the original scheme included a link road under the Dublin-Sligo Railway and the Royal Canal (requiring temporary diversion of the canal and a jacked box under the railway).

Atkins developed an alternative design utilising a five span viaduct approximately 155m in length over the railway and canal. We prepared an EIS, gave evidence at oral hearing and secured statutory approval for the alternative design within an eight month timeframe after award of the contract. This alternative provided substantial time and cost savings, reduced risks and environmental benefits.