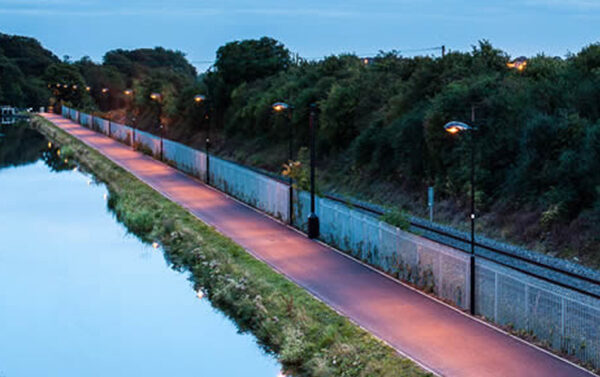 The project is a dedicated cycle and walking route Greenway along the Royal Canal towpath and it is part of the overall Dublin to Galway cycle route. The client for the project is Fingal County Council and the funding has been provided by the National Transport Authority.

Atkins completed the Feasibility Study for the entire route within the Fingal County Council area (Ashtown to Leixlip) followed by detailed design and construction supervision of phase 1 of the scheme (Ashtown to Castleknock).

The project is based in a very sensitive ecological corridor within the Dublin area. The canal corridor itself is a designated proposed Natural Heritage Area and the environmental, ecological and industrial heritage sensitivities of the site provided significant challenges for the development of the scheme design.  The biggest challenge on the project was dealing with the habitats of protected species and minimising the impacts on those habitats. As an example, extensive habitat surveys were carried out to determine the presence of protected species.  Bespoke design features were developed in consultation with the National Parks and Wildlife Service (NPWS) and Fingal County Council Conservation Department to mitigate and minimise the impact the scheme would have on bats in particular.  A bespoke lighting system was developed incorporating automatic dimming and remote monitoring technology so that natural environmental conditions could be maintained at dawn and dusk when bats are most active and feeding along the canal corridor.

This greenway will be a major asset for outdoor recreation and tourism in Ireland while also providing a real “traffic-free” alternative for commuter cyclists travelling between Dublin City Centre and the Blanchardstown / Castleknock areas. The new greenway route will be ideal for recreation purposes, providing an outlet for cyclists and walkers in the area.